Project Semicolon began in 2013 to spread a message of hope: No one struggling with a mental illness is alone; you, too, can survive and live a life filled with joy and love. In support of the project and its message, thousands of people all over the world have gotten semicolon tattoos and shared photos of them, often alongside stories of hardship, growth, and rebirth.

Project Semicolon: Your Story Isn’t Over reveals dozens of new portraits and stories from people of all ages talking about what they have endured and what they want for their futures. This represents a new step in the movement and a new awareness around those who struggle with mental illness and those who support them. At once heartfelt, unflinchingly honest, and eternally hopeful, this collection tells a story of choice: every day you choose to live and let your story continue on. 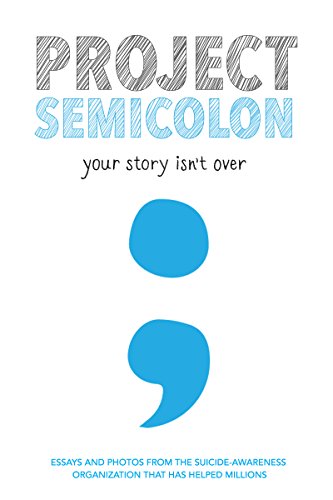 I’ve been following Project Semicolon for a couple of years now and it’s always amazing to read everyone’s personal stories with their mental health and how they have found support in the people around them. The project has become an important part of our modern day culture and the community which has provided support to so many is something that is just incredible.

I was therefore really looking forward to read this book, but it pains me to say that I didn’t really enjoy reading it. Now I realise it’s probably not a book you’re supposed to “enjoy” – more of an insight into people telling their story – but I found that the book tries to include far too many people, and therefore doesn’t allow for much depth or background in understanding. I know these stories are from those who are part of the online community, but with over 140 people telling their ‘story’ (plus pictures), it means most people’s stories are only a paragraph long – if that – and only a few which are a couple of pages long. Because they were so short, it was hard to grasp an understanding of where they’re coming from. It felt I was a reading a book of tweets and it therefore became repetitive very quickly (because they were just very general points due to the short length).

Unfortunately, I don’t think this book truly reflects how great the Project Semicolon movement is and I think that’s a shame. This book is probably great if you are involved in the project, and seeing your story alongside other people’s stories must be overwhelming to see how so many people have gone through similar things as you, but as a book to read, I found it quite repetitive. The Project itself is incredible though ❤

Hi, my name’s Marie, I’m 23 years old and I love to blog about books! I particularly love YA and Feminist/LGBTQ+ reads, but read a lot of different genres. I’m also a fan of musicals, art and crafts, mental health activism, and bullet journalling, so you’ll see a sprinkle of that from time to time ❤

Read more About Me here!!

Watching The Top 100 Musicals (According To IMDb)

Do Self-Help Books Actually Work? I Read 15 In The Space Of A Few Months…Here’s My Verdict